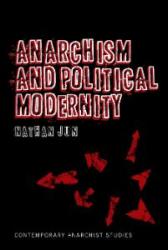 “This book stands out among works of the emerging new generation of anarchist theorists. Unlike much of the trendy “post-anarchism,” it is firmly grounded in political philosophy and the history of anarchist thought. Jun shows that ideas often seen as bold new “post-modern” innovations above all, the critique of representation are in fact deeply rooted in the anarchist tradition. He debunks the equation of classical anarchist theory with the weakest aspects of modernism and shows anarchism to be a powerful radical tradition that goes beyond the limits of conventional liberalism and socialism. Jun presents strong evidence that anarchism is now becoming most the promising theoretical alternative within the dissident academy.” John P. Clark, Gregory Curtin Distinguished Professor of Humane Studies and the Professions and Professor of Philosophy, Loyola University. “